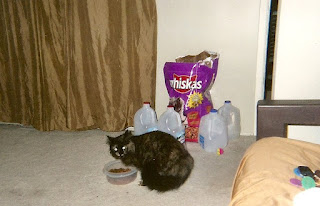 Mama came into my life when I moved into an apartment complex in Studio City in 2000.  The parking lot bordered a restaurant and hotel, providing enough food to keep the local ferals fed (but not healthy).

When I first moved in, there were 37 ferals that were living in the area and eating out of the dumpsters.  The apartment manager admitted that she would call Animal Control every six months to have them trapped.  But more would always show up to take their place.  I pointed out that there was a good food source with the dumpsters and asked if she would let me handle the situation my way.  She was exasperated enough to let me try!  With some help from friends and Catnippers (now FixNation), I started TNR (Trap-Neuter-Release).  By the time I moved, we were down to two ferals (both neutered Toms).

Mama was a skinny, scrappy, smart young kitten who had her first litter young (my guess would be no more than a year old).  And kept having them.  No matter how I disguised the traps, no matter what I put in them (KFC, tuna, mackerel, salmon, you name it and I tried it!), she wouldn't go in them.  In fact, she would sniff it, hiss at it and lay down in front of it, waiting for me to come downstairs and see her.  Defiant little thing.  I had to admire her pluck.  She also didn't trust me enough to eat with me standing anywhere near her so netting her was out of the question. 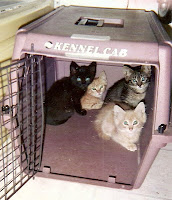 Mama gave me three litters a year for 7 years.  She was an excellent mother. I was working on a television show and would get home at 1 or 2 in the morning to find her teaching those kittens how to hunt in the parking lot using the crickets.  At 6 weeks, the kittens were weaned and she would chase them off.  They were hurt, confused, and I would pluck them up and find them homes.  Only to have her give birth again.  (Pictured is the Harry Potter litter:  Harry, Draco, Dobby, and Weasley)

For 7 years I fretted over her and her 3 litters a year.  She brought 84 kittens into this world.  I had given up hope of ever fixing her, but I hadn't stopped trying new angles.  My last tactic was luring her ever closer to my front door with the wet food she loved so much.  Eventually, I would just shut her inside and figure it out later.

The colony numbers were slowly dwindling as no cats were reproducing.  We had two fairly territorial Toms that would tend to run off any new cats.  Still, they'd let females stay without much of a fight.  Two new cats had shown up in the past few weeks so I was trapping.  I set the traps, headed upstairs, and waited for the sound of the door snapping shut.  I put tuna in them, which was standard - nothing fancy, just smelly enough to lure them in.  I had barely walked in the door when the first one clicked shut.  My husband I raced downstairs to pull the trap before the other cat figured out what was happening.  When we got the trap upstairs, he lifted the cover up to see which lucky feline had wandered in.

"Hey hon," he hollered from the bathroom.

"You're not going to believe this."

No.  It couldn't be the elusive, smart cat that had been dodging my traps for years.  I set them with TUNA.   I didn't bother to disguise them.  I stormed into the bathroom in disbelief, lifted the cover and there she was.

She meowed at me.

She had a litter outside waiting for her.  We got her spayed the next day, much tears of joy were shed, and she went back to the litter 24 hours later.  I had her for two more years.  She started coming upstairs for dinner every night.  Mama wasn't going to eat with the rest of the street's ferals.  She wanted her own plate.  She had earned it.  During the winters, she would spend hours curled up in front of the space heater while my own cats were locked in the bedroom.  If I ever tried to shut the front door, she would bounce off the walls and howl like crazy.  But I could be patient.  The plan was to shut the door eventually.  I was easing her into things.

Mama disappeared one Christmas.  I called to her every night.  I wandered up and down the street in search of her.  Ten months later we moved to Burbank.  The colony was down to two cats and a neighbor took over the feeding.  I left my number with the new apartment manager and the neighbor.  If Mama showed back up, they were to call me.  I would come over and get her.

But I never got a call.  We would go looking for her, driving the fifteen minutes to the neighborhood, and wandering the streets in search of her, for the next year.  It's been five years.  I miss her like crazy.  I wonder what happened to her.  Sometimes, I cry.

She left me one reminder, though. 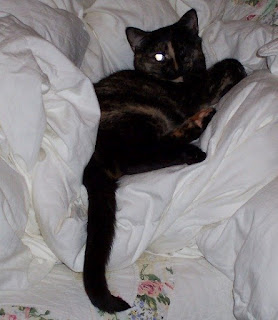 This is Pip.  Pip was one of her kittens.  She's living the life her Mama should have lived.  I'm spoiling her rotten, and have been for ten years now.