One Step, One Voice, One Message: STOP PUPPYMILLS! 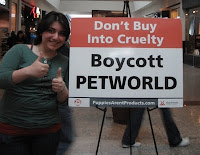 How can we be friends to man's best friend? It's a question, it seems, that a lot of people don't think about.

But Best Friends thought about it. Most definitely. The Puppies Aren't Products campaign, simply put, rocks. I'm especially proud to say I've joined in on the action. January 16th of '10 was my first day as an official volunteer, being at an educational tabling event at the Northridge Fashion Center. Our goal? Educate the public. Urge them to boycott the pet store in the mall because they get their dogs from puppymills, mass breeding facilities in which dogs are subjected to sickening conditions simply for the profit of their “greeders.” In fact, no good breeder would give their dogs to a pet store. Good breeders want to evaluate potential clients, not blindly pass their puppies out to strangers!

The pet store in question had a banner up: “HUGE SALE! Up to 50% off STOREWIDE.” We felt as though our campaign was getting to them. What made us laugh was the fact that their discounts may still not even compare to shelter dog prices. My dog? Twenty-three dollars at the city pound, house broken, microchipped, neutered, and ready to go. However, our pity was strong for the puppies in the store. Two German Shepherd puppies were growing rapidly in the small cells at the store. They barely had any mental stimulation or room to play. I wondered why people would help these businesses at all, even after seeing the deplorable conditions in the pet store itself. You cannot “rescue” a pet store dog by buying it, you're only giving more money to the source of the abuse and neglect.


As I sat at the table, I watched the oncoming people. Many stopped by with great interest, gathering our informational sheets enthusiastically, and asking questions. Some even told us they were looking for a dog, in turn receiving a list of local shelters and animal rescues they should consider; they were enthralled by the news. Others signed our petition, asking the store to go humane.

Stop selling puppymill puppies! The message rang strong and true. With confidence I can say the majority of our passers-by were positively affected by our signs and literature. For the nay-sayers that doubt the existence of puppy mills, we gave video links showing what some people found when they took undercover trips to mills. As gruesome as it sounds, it is true, and very, very sad.

It made me happy to see younger generations like myself come to the table. “What are puppymills? Where can I get a dog, then?” were among the myriad inquires we got. With a smile, we gave honest answers, and I'm sure the youth were satisfied to learn what happens behind closed doors, because they now know not to contribute to it in the future.

After a couple dirty looks, it was then I realized what a bad stereotype must be looming over animal welfare activists. They must be crazy. They must be out to brainwash our children to be crazy like them. But the truth is: We're not. We are normal people simply trying to spread the word of compassion towards animals.
I'm sure anyone with a heart would agree puppymills are a bad thing. No one profits but the “greeder” and pet store. All the buyer gets is an overpriced, poorly-bred dog, and a dead dog in the shelter. It's truly unfortunate.

I noticed that some parents would lead their children away from our booth, despite their kids' asking to see what we were all about. It's not propaganda. We don't bite! We're friendly! Honest! I wanted to tell them in response to their hesitant expressions. But I know they'll come around. Everyone eventually does. Or, I hope, at least most of them do.

After my two hour shift, a wave of satisfaction passed over me. I talked to people today. I can make a difference. We can all do our part to help animals, especially the pet store victims; it just takes one step, one voice, one message: STOP PUPPYMILLS!

Posted by Jennie Bailey at 4:28 PM No comments:

I decided to call the breeders myself to find out more about the environment they came from. The first breeder never answered the phone and I wasn’t able to leave a message. The second breeder was surprisingly open with her information. She said she had approximately 30 breeding females and bred Pugs, Malteses and Pomeranians. When I asked about kenneling facilities she willingly shared they were kept in a separate building in raised, wire hutches with automatic waterers and feeders. She also shared that their hutches had indoor/outdoor access so there was no need to take them out. The only question the woman struggled with answering was regarding the number of puppies she produced every year. After several minutes and several vague answers, she eventually said close to 100. However, 30 females are likely producing over 200 puppies a year. It was a classic description of a small puppy mill (if she was even being honest about the number of dogs she had).
I went to visit my family over Thanksgiving and decided to visit the pet store that the puppies had come from. I was curious to experience firsthand the lies they tell their customers. When I asked the co-owner where she gets her puppies from, she assured me they have a rigorous screening procedure and only use the best breeders. She told me each of her breeders focuses on only one breed, they have only one litter at a time and are raised with the family in the home. When I asked if she would use someone who had 30 females housed in a shed she acted horrified and said “Never!” I proceeded to tell her about my conversation with one of her breeders and she denied it repeatedly, essentially accused me of lying, and eventually went into the back of the store “to call the breeder.”
While the owner hid in the back, the store clerk tried to tell me that the conditions aren’t as bad as I thought. Though she had never been there herself, she said “the Midwest is huge, there’s tons of land, and the dogs all live on farms with acres to run around on.” I laughed at this fantasy image she had created of puppy mills, and then pointed out the breeder herself admitted she keeps them in cages at all times. The clerk then stated that “ALL” dogs have coccidia and giardia, which is completely untrue, and that the kennels are inspected to make sure they meet minimum requirements. I pointed out that the USDA’s minimum requirement stated the cages only need to be 6 inches longer than the dog’s body length, and if they’re housed with another dog they aren’t required to provide exercise. They can legally live this way their whole lives. But does that make it okay?
I had lost count of the number of lies I had been told since entering the store. I also had a newfound appreciation of how so many people are tricked into supporting this cruel industry. Unless you are really familiar with the subject and the common false practices, it was easy to fall for their sales-pitch. The store-owner eventually came out from the back after 20 minutes and claimed she couldn’t reach the breeder, but that she would “follow up” to investigate.
(The following video is an HSUS investigation of Petland pet stores and provides an example of the lies store clerks tell interested customers.)

It’s now been over 2 months since the dogs were purchased. The couple struggled for a long time over whether they could handle two puppies. They came seriously close to giving one up to a friend before finally committing to keep both. They’re still working on housetraining, and they’ve enrolled both dogs in obedience training and socialization classes.
My hope is that both of these dogs will live a long, healthy life and be part of the 10% of pets that enjoy a permanent loving home. But even in this best case scenario, the parents of these pups will lead a sad, miserable life; they will be confined to a cage for years, receiving no human affection or vet care, breeding every heat cycle until they are deemed “unprofitable,” and then killed. They deserve better. They deserve the same life their pups will enjoy. They deserve a family that will love them. While it’s easy for an unsuspecting consumer to fall prey to the lies of an unscrupulous pet store-owner, the simple fact is that NO RESPONSIBLE breeder sells their puppies to pet stores. Period. The only way the cruel puppy mill industry will disappear for good is if people help spread awareness and stop buying dogs from pet stores.
Posted by Jennie Bailey at 9:15 AM No comments: