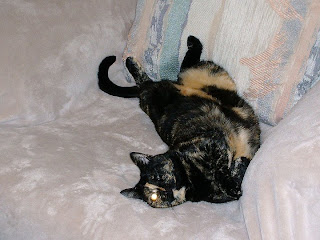 This is my Pip. Short for Pipsqueak. She's the coolest cat ever. I rescued her off the streets of Studio City when she was 9 months old. Her mom was part of my feral colony. It took Pip forever to trust me. Her brothers had warmed up to me long before she ever did. But it was worth the wait.
She had a rough start. She had upper respiratory and ended up spending three weeks at the vet. It was touch and go. The vet said to me, "If she makes it, she's going to make someone a great little pet." She was everyone's favorite kitten. They said the second anyone walked into the room, she would start purring. And her motor is loud. The idea was to foster her, nurse her back to health, and find her a good home. In the end, I couldn't give her up.  The upper respiratory went into her eye. The sore popped and severed her cornea so they had to take the eye. She's had one eye since she was about 10 months old.
She's 11 this month. She's moving slower. Sometimes she limps. She can be a little stiff in the morning. I know that cats can live to be 20 or more. Erik and I have never had one live more than 14. So we're nervous. We love all three cats, but Pip is our heart. She's fully accepting of any pet we bring in - whether they're here for a night, for weeks, or to stay. When we move, she's good with it. There's no adjustment period for her. Put her in a career, and she'll travel.
Why am I writing this? Because I felt a lump on her side tonight. She'll be going to the vet next week to make sure it isn't anything serious. But as she sits here purring away between my husband and I tonight, I still worry.  Will be saying goodbye early? Can cats this amazing live long lives? I sure hope so. Pip still has more kittens to teach. More sunlight to lay around in. Much more love to give and receive. 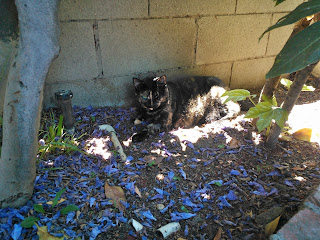 When you first get your pet, a decade can seem like a long time. It goes by so fast - and you're always left thinking it's never enough.
﻿
Posted by Jennie Bailey at 12:30 AM 1 comment:

Lily is very dog social off leash. On leash, though, she can be fearful. Her warnings are loud and over-the-top. She was attacked by a shepherd as a puppy and this had left her fearful of the breed. We've hard with training and she's a peach when it comes to off leash dogs or aggressive dogs. She looks first to us for how to react in any situation.

Still, it's frustrating to me that we have to deal with situations where dogs are off leash or out of their yard. We have leash laws for a reason. They're designed to keep all dogs safe. In our neighborhood, we have a big problem with small dogs being off leash. It's enough of a problem that I'm armed with spray.

Tonight, we were jumped by a four pound Yorkie. It's clear that the fence isn't adequate for keeping small dogs in. The family was in the yard, but no one was watching the dog. When we walked passed the yard, he came silent and stealthy out of the shadows. With no sound, he jumped on Lily's head and clamped down. In that situation, I can't use the spray because I'm not going to spray my own dog. Lily was yelping and shaking her head vigorously, but the Yorkie was clamped down and not letting go. I can't even tell you how we finally got the little biter off.

I was extremely frustrated when the owner's answer was to spank her dog. They have a fence that won't keep this dog in the yard and no one was supervising the dog. That's not on the dog. That's on the irresponsible owner. This dog will end up like so many others in this neighborhood - either hit and killed in the street or satisfying a coyote. It's hard to educate an owner when you're concerned about the well being of your own dog. I tried, but she wasn't interested in listening. She kept pointing to our dog and saying 'vicous' repeatedly. Our dog who hadn't done anything while her dog bit her. Our dog who didn't chase after the dog as it ran away. Our vicious dog who could have killed her dog with one shake but did not.

I don't even know that this post has a point. I'm just speaking out for all the frustrated owners. Whether our dogs like other dogs or not, there are dogs out there who won't tolerate what Lily does. For that reason, leashes are imperitive. Not flexi-leashes. Those can get a dog into trouble as well. When you walk the dog, walk the dog. Don't talk on the phone. Your dog can be in a dangerous situation in seconds if you aren't paying attention. When you are out in the yard with your dog, watch him like you would your child. Dogs are good escape artists and can be over the fence, under the fence, through the fence, in a small amount of time.

What about you - have you ever had trouble with off leash dogs on a walk? Or a dog that got out of the yard? How did you handle the situation?

The weekend is here - and we hope you have fun plans.

Let's start it off with some laughs, shall we? 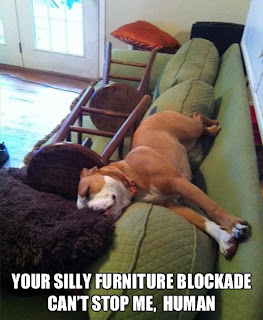 If you haven't seen TreT the Parkour Dog, you should google him (or go to YouTube).
This is a tribute to him - other dogs doing Parkour TreT style!


We hope you have a fabulous weekend!
Posted by Jennie Bailey at 12:30 AM No comments: 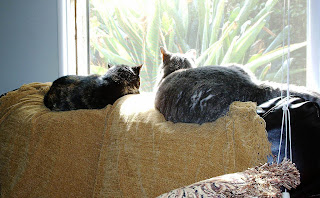 It's one of our biggest fears at pet owners - finding out that our pet food has been recalled.

Even when you're purchasing high quality pet food, it can happen. We feed the cats Innova. It used to be a high quality cat food. When Proctor & Gamble bought it, they promised to continue the same formula. We noticed a difference within the first six months. We even had a few bags where we found a piece of plastic in it. But the cats loved it and the two times we tried to switch them last year, they flat out wouldn't touch the new food. They ate around it, always leaving it in the bowl. When nothing but the new kibble was left, they'd turn their noses up at the bowl.

If you're feeding any Natura Pet food (dog or cat), I urge you to click here and check the list for recalls.

The first recall hit and we checked our first bag - it was a match. Out that bag went, off to the store we went, and bag number two was purchased. After a few days, the recall expanded. It included the latest bag of food as well.

Then one of the cats ended up with tummy trouble. Could it be the food? It could, though no cases had been reported. We tossed that second bag as well.

There were now no bags to be had. All the pet stores had pulled from their shelves. We had used up our emergency earthquake kit bag just before the recall so when I pulled that bag out, it was a match and had to be tossed too.

We had been meaning to switch foods after the lawsuit. When the judge rules that the company can no longer claim that their products are human grade, you know that things have gone downhill. We were ready to say good-bye. This recall simply forced our hand.

But what do you do when switching your pet's food during a recall? We all know that they have sensitive tummies and we have to mix when we're transitioning over. During a recall, there isn't any food to transition with.

Find the closest thing to what you're feeding.

My original choice had been Orijen. High quality food, no recalls in company history. Reading the ingredient list, however, it became clear that this would be far too rich for them. Our local pet store (not a big chain, but a small place called Pet Haven) was more than willing to help me through this fiasco. We ended up settling on Halo - it matched the ingredient list closely and the owner recommended it. She gave me a few sample bags to see if the cats liked it first.

So we're off on a new food adventure. Fingers crossed that the transition will be smooth. Or as smooth as it can be when switching foods cold turkey!

What about you - has your food ever been recalled?  Have you ever had to transition suddenly?
Posted by Jennie Bailey at 12:30 AM 3 comments: