Let's start our weekend with some CUTE videos!

How you can not finish the day with a smile after those?

Have a great weekend everyone!!
Posted by Jennie Bailey at 12:01 AM 1 comment:

My bestfriend and I love to make our dogs treats. It's a fun thing to do to occupy our time during a playdate! And it's great to have something to send home with the dog who has played with Lily and gotten her worn out for the night! Here are a few of our favorite recipes. Do you have any?

Preheat oven to 375. In a bowl, combine flour and baking powder. In another bowl, mix peanut butter and milk. Once mixed, add it to the flour and baking powder bowl. Mix well and then knead the dough. Roll dough onto lightly floured surface. Use cookie cutters to make fun shapes or roll them into small balls and drop on cookie sheet. Bake for 20 minutes.

Preheat oven to 400 degrees. In a medium bowl, combine the first 4 ingredients. In a large mixing bowl, combine the garlic and oil. Then add the flour mixture and the stock into the oil and garlic, beating until the dough is well mixed. Roll the dough on a lightly floured surface. Cut the dough with cookie cutters or make your own shapes with a knife. Bake 20 to 25 minutes on greased cookie sheets until the biscuits are browned. Cool before serving.
**** The brewer's yeast and garlic are rumored to help keep fleas away.

Fill ice cube trays with water, then drop in the dog treat. Place in freezer until frozen (around 2-3 hours). Pop out and give to your dog. Great treat on a hot summer day!

For more great homemade treat recipes for your dog, check out these books:

Three Dog Bakery Cookbook: Over 50 Recipes for All Natural Treats for Your Dog
by Quadrillion Press and Dan Dye
The Ultimate Dog Treat Cookbook: Homemade Goodies for Man’s Best Friend
by Liz Palika and Troy Cummings
Treats!: For Dogs, Cats and Birds by Kathleen Stacey and Deborah LePage 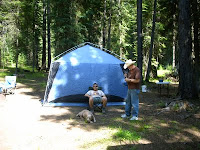 We love to take Lily on road trips with us. She just spent a week in the mountains in Oregon lounging around our campsite, greeting visitors and hiking the mountains with us. 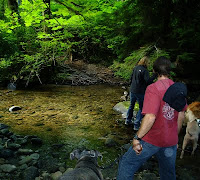 Then we spent two days in Sequim, Washington visiting friends. She got to do a few fun hikes/walks with friends in their beatiful neighborhood. Yes, that creek runs through the forest only a few short blocks from their house! Lily had a blast. 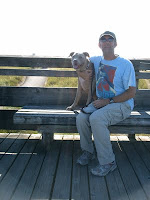 We stopped in Long Beach, Oregon and walked along the pier. 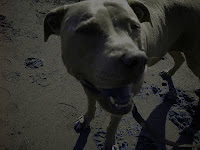 There were steps leading down to the shore so we took them. Now that is a happy puppy! 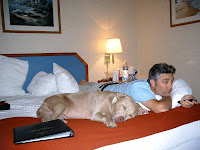 She ended each evening sacked out and snoring. A good dog is a tired dog.


It's important to us that we include Lily in our lives. She deserves a chance to get out there and sniff, explore and investigate this wonderful world around her. It makes her a better dog - well socialized and well traveled. It's fun for us as well. We get to see the world through her eyes, with all of her enthusiasm and wonder.

What about you - do you take your pets with you when you travel?
Posted by Jennie Bailey at 12:01 AM No comments:

How Many Is Too Many?

We just got back from a nice vacation with our dog, Lily. Our pet sitter took care of the cats for us. They were happy to have us back, but not so thrilled we brought the dog back with us. Waiting in our mailbox was a notice from the city. They are now requiring all cats be registered, in addition to dogs. The registration fee is $5 a year. BUT to register them, they must be microchipped. The shelter is willing to offer this additional service (conveniently) for $10 per cat. Oh, and one more thing - there is now a limit of 3 pets (cats and dogs) per residence.

I understand that times are tight and shelters need to raise money. This particular city shelter has come under criticism a lot in the past decade because they are never full and they refuse to help out other shelters because this would drive up their numbers. Yes, it would save lives but that's beside the point. For them, it's numbers.

Many cities place restrictions on pets. It's a reasonable thing to do. Most cities say 3 dogs. Lumping the cats in with the dogs will not end well for the cats. If the number of animals is not overwhelming to the caretaker and these animals are well taken care, why should there be a restriction? If someone has a large home with a large backyard, why are three dogs and three cats not an acceptable number? The animals are the only ones who suffer and we're already killing over 4 million adoptable animals each year in our shelters. Why add to that number at a time when animals are being relinquished at a higher rate with the economy? These pets have homes where they are loved, fed and cared for. There is no logical reason to take them out of these homes and add to the numbers at any shelter.

I get that the city wants to make money - and feels that mandatory registration is a great way to do so. However, if they aren't going door to door, they aren't going to get every pet registered. We have a young man who lives down the street from us and doesn't register his pets because he "doesn't believe in it." How many more are there like him on our block? In our city?

And how many is too many?
Posted by Jennie Bailey at 12:01 AM No comments: