The Story of Harvey 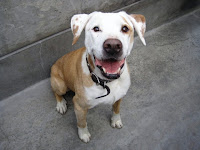 This is Harvey. Harvey had until today to be rescued from the shelter he ended up in because his family unceremoniously dumped him at a dog park after nine years. He has known no other family. Now he sleeps on a cold, concrete floor and searches for hope in the faces of people that pass by his kennel run day after day because he is "too old" or "too large" or "looks like pit bull" (he's actually a lab/sharpei mix according to the shelter). He's a great dog who is down on his luck. Harvey is great with people of all ages and other dogs. He tested so well on his temperament test that the staff has been using him to test other dogs. Chances are Harvey reached his deadline tonight without making it out of the noisy, overcrowded shelter into a loving home with a warm bed for his weary, tired bones. Harvey is but one of thousands who ended their days this week in a stressful shelter. It doesn't matter if they are purebred, hybrid or mutts, they all go out the same way and end up in a dumpster behind the shelter. Is it because they are bad dogs? No. Poor dogs like Harvey just had bad owners. Their owners didn't make a lifetime commitment to them. Instead of viewing them as the living, breathing animals they are, they view them as disposable objects. Dogs feel every emotion that we do. Studies have shown that they grieve their owners, even the bad one like Harvey's. They may spend years in the backyard with no attention or years in the house until the baby comes and pushes them out. It doesn't matter. They have the emotional capacity of a toddler. Imagine leaving your two year old at daycare and never coming back for them. That's what your pet feels when you dump them at the shelter and walk away. Many wait hopefully for days and weeks (if they are lucky), desperately searching the faces of people who pass for any sign that their "owners" have come back for them. They never come. Most of them end up being pulled down the long hallway to the room at the end where their lives will end. They struggle and fight on that last walk like they know they won't be making it back out.

When we started our search for a pet, I walked through row after row of these hopeful faces. All these wonderful dogs whose "owners" had failed them miserably. I vividly remember a woman bringing her two small boys in, dragging an older terrier mix behind her. The dog was in need of grooming and desperate for a kind word. She handed the leash to a shelter worker. "This dog is too old," she announced. "Um, okay," was the response because there really isn't any other response for logic like that. She then led her children into the shelter to look at the puppies and they picked one out as their "too old" dog was being pushed into a kennel run just down the row. This was a city shelter so they aren't allowed to say no to any adoption.
I couldn't let her leave without pointing out the message that she was teaching her children. Old means no good. "Don't be surprised," I told her, "when they put you in a home rather than taking care of you because you are too old. Kids learn from their parents." She didn't care. But she will care later in life when she is "too old" and her sons dump her the way she dumped that dog.

Every shelter across the country is overflowing at the moment with dogs like that poor, old terrier mix. Dogs like Harvey who didn't get good owners willing to make a lifetime commitment to them. There seems to be a misconception that their dog will find a home - they're purebred (big deal, that's one in every three dogs), they're well behaved, they're cute. The shelter is full of purebred, well behaved, cute dogs. So are the dumpsters in the back. Then there are the poor dogs whose owners failed them completely. They've lived their entire lives in the backyard with no socialization, no company, no training. These dogs have no hope of ever making it out. People don't want dogs like that. They gravitate towards the friendly, well trained, cute dogs. Even those dogs don't have a very good chance of getting out. Thrust into an unfamiliar environment, some dogs shut down completely, even well trained and well socialized ones. They shake at the back of their kennels and don't come out to see people. Those dogs have lost all hope. After all, the hope they did have left them.

Pets are a lifetime commitment. Moving is not a reason to give them up. We have an American Staffordshire Terrier. This breed is on most ban lists. When we move, we allow months to find a place to live WITH her. Our friends Molly and Anthony have moved several times with their American Pit Bull Terrier without trouble. If we can find rentals with our breeds, no one has an excuse to leave a pet behind. There are so many pet friendly rentals that no one should be dropping their dog or cat off at the shelter because they are "moving." You take the time to find a pet friendly rental and save the money to afford a pet deposit. When you don't, your pet becomes just another statistic like Harvey and so many other good dogs who were unlucky enough to be purchased or adopted by bad owners.
Posted by Jennie Bailey at 9:31 PM No comments:

The Truth About Pit Bulls

Whether or not you're interested in adopting a pit bull, there's important information you need to know about these dogs. Irresponsible owners and the media have contributed to grossly inaccurate information about them. We hope the following factual information about breed history and temperament standards will help alleviate the fear and misinformation associated with pit bulls. 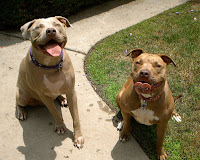 Dog aggression and human aggression are two distinctly separate traits and should never be confused. Because of their history as a fighting dog, pit bulls are prone to dog aggression. However, care can and should be taken to modify this tendency since pit bulls can often learn how to be dog tolerant or even dog friendly. It is quite common for a pit bull to be wonderful with people, while at the same time not 100% trustworthy around other dogs. Human aggression, however, is not a normal trait in pit bulls and should not be taken lightly. The official UKC breed temperament standard is the following: "the essential characteristics of the American Pit Bull Terrier are strength, confidence, and zest for life. This breed is eager to please and brimming over with enthusiasm. APBTs make excellent family companions and have always been noted for their love of children. Because most APBTs exhibit some level of dog aggression and because of its powerful physique, the APBT requires an owner who will carefully socialize and obedience train the dog… The APBT is not the best choice for a guard dog since they are extremely friendly, even with strangers. Aggressive behavior toward humans is uncharacteristic of the breed and highly undesirable." If poorly bred, mishandled, abused, or unsocialized then a pit bull, like ANY other breed, can develop behavior problems or aggression that is atypical of the breed.

Due to misinformation and lack of education, certain breeds have been incorrectly labeled "dangerous." Dogs of all breeds can and will mature into well tempered adults if raised properly. A large part of raising any breed properly includes socializing and training them starting at a young age. If you're interested in learning more about whether a pit bull would be right for you, it's important to research the breed. The websites badrap.org and realpitbull.com have large amounts of quality information.
Posted by Jennie Bailey at 9:03 PM 3 comments: