Why I Train My Dog

I love to walk. I love to walk with my dog. There is nothing more annoying to me than walking and being harassed by another dog whether I have my dog with me or am solo (small dog owners, take note - that little yipper may be cute to you, but the rest of us resent the interruption as it barks and lunges at our ankles or at our dog). This has driven me to be almost drill sargentish about any dog that I adopt. When I walk Lily, she sits at EVERY corner. Without exception. If there is a walk or jogger approaching us, we get onto the grass and she sits in front of me with her eyes on me until I release her.

I take pride in hearing the following daily:

"What a good dog!" (Three times tonight in two blocks)

"What a sweet baby!"

"I wish my dog was that well trained!"

Lily really is a good girl. She didn't come this way. It took a lot of time, effort and energy to get her there. She did more work than I did. She deserves the praise so it's nice when she gets to hear it from someone other than me.


What annoys me on walks:

"Don't let it hurt my dog!" (Heard that one twice tonight as the little dog owners struggled to pull their flexie leashes in BY HAND because they could not control the leash or their small aggressive dog. My dog's eyes never left mine, by the way, even though I'm sure she wanted to run while I had to fight the urge to punt the dog back at the owner)

"You trained your dog?" (This one was said totally incredulously like training was unheard of issue while she picked up her "teacup" in its sweater and it bit her on the cheek - ah, redirected aggression...workable issue with some training)

I would be ashamed to walk the neighborhoods with my dog acting the way that 98% of the dogs in my neighborhood act. I used to think it was a small dog issue. Perhaps owners of large family dogs are just more responsible. 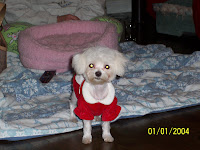 She weighs all of 3 pounds.

She is well trained.

Kiwi is a good girl because her parents didn't think that having a small dog meant that you didn't have to train her. Notice how good Kiwi looks in a dress. Kiwi can be fashionable AND well behaved. It's possible. 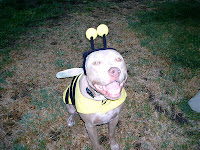 Even Lily can be fashionable and well behaved. Note her fabulous sit in her stylish Bumblebee costume.

It's frustrating hearing from people that they have a "bad" dog. Dogs are only as good as their owners. My dog rocks because I rock. Yes, I'm patting myself on the back. Kiwi rocks because her owners rock. If you have a bad dog, what does that mean? It's a reflection on you as an owner. You haven't done your job. Even when a dog comes to you at four years of age, they are still a blank slate - wiped clean for you to train. I train my dog because I want a "good" dog. Don't you?
Posted by Jennie Bailey at 10:59 PM 2 comments: 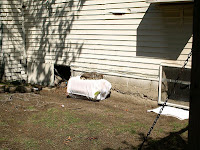 I've been told this on numerous occasions and while I would like to take credit for being awesome, the truth is that I am no more awesome than YOU, the person reading this right now.

So am I. One person who is no more awesome than you.

Sometimes I do awesome things.

I am only one person who is no more awesome than you but sometimes I do awesome things.

See? No different than you. You can do awesome things too. It's very simple. When you see a need, help. That's it.

Example #1: An email went out from a friend who worked at Disney. She had a delivery guy who was doing something awesome - feeding the stray cats in his neighborhood. He gave them shelter and food. The shelter was not inside his house because these were feral cats struggling to survive. He saw a need and he did something awesome.

Then my friend, Laura (who does many awesome things), sent an email out asking if anyone knew how to trap cats. See, just one person doing something awesome. She didn't have experience with Trap-Neuter-Release, but she had a plethora of contacts and figured someone would.

I got the email. I know how to trap cats! So I did something awesome - I emailed her back and said that I would be willing to help. One person, no more awesome than you, doing something awesome.


Example #2 - We are teaching in Lake View Terrace right now. I came out of school the other day to find a sick cat. I met the woman who is feeding the local cats. She's just one person and she's doing something awesome.

She broke down and cried because she's overwhelmed. Kittens are dying. She doesn't drive. She wants to get the cats fixed.

I can trap! I'm just one person, but I volunteered to help. She won't be sad anymore because no more kittens will be born to get sick or end up in coyote tummies.

She is one person doing something awesome - feeding the cats that have been abandoned in her area.

I am one person doing something awesome - helping her trap them.

FixNation is doing big awesome helping people like us do this for FREE.

But they are more than one person.

"It takes someone special to do what you do."

I'm no more special than you.

Meredith is no more special than you.

We are simply individuals who saw needs and stepped up.

Anyone can do it!

Can you imagine if every one person did one awesome thing? What a great world we would have!

We'll feature one person doing awesome again next Wednesday! Get ready to hear about the awesome things that Lea is doing!

So tell us - what awesome thing(s) have you done?
Posted by Jennie Bailey at 6:51 PM 1 comment: