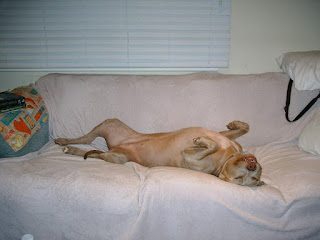 We've been very lucky with Lily.  She hasn't really struggled with fireworks or thunderstorms in the past.  Last year, though, we were walking her on the 3rd of July and some teens thought that it would be funny to set off some firecrackers right next to her.  It's hilarious watching a big dog jump in fright, right?

The next night was awful for Lily.  Even closed up in the house with the television on, she shook and panted.  She ended up hiding in the hallway.  When it was time for bed, she slept with us (something she hadn't done for almost a year).  For months, she would not walk after dark.  If we tried to force the issue, she would pant the entire walk.  Not good when you have a dog who is sensitive to heat and it's not cooling down out until well after the sun goes down.

We were able to right the ship again with patience, and some help from Bubba (her best dog friend).  Super yummy treats that were only available on night walks started to ease her back in.  Surprising her with Bubba on various walks sweetened the deal.  Soon, we had our girl back.

Like many dog owners, we were dreading the fireworks this year.  We drove past Disneyland last week during the show and Lily panted her way through it.  We knew this was going to be a challenge.  Too late, I had discovered Through a Dog's Ear (link here - see their Canine Noise Phobia series under the Music section).  With not enough time to plan, we went back to her early years for inspiration.

Her first 4th of July, she huffed at the fireworks.  It was cute and entertaining, but we knew that she was uncomfortable.  The second 4th of July, she had no reaction.  When they started, she opened her eyes to look at us, but we ignored her so she went right back to sleep.

Sleep.  That was the key.

Operation Tired Lily was put into action yesterday.  We started with an hour and a half hike, then let her lounge in the yard (on a blanket so she didn't aggravate her allergies!) because she doesn't really nap when she's out there.  We capped it with an hour walk after dinner.  They were testing the firing during the walk the last few nights and she was not reacting to that at all so we were hopeful.

At 8:30pm, Lily was up on the couch -- and she was snoring.  We turned on the music channel (Soundscapes is her favorite) a bit louder than usual, lighted a few vanilla candles (for calming scents), cranked up the air conditioner so that it was nice and cool.

She didn't sleep.  The first bangs woke her up.  But she didn't pant either.  Her eyes remained closed, her breathing even.  Her ears perked up at the finale, but that was it.  Operation Tired Lily was a success.  It also proved to be Operation Tired Mom and Dad too.

Does your dog struggle with fireworks? Or thunderstorms? What works to keep them calm?
Posted by Jennie Bailey at 11:13 AM No comments: