I Love My Job or The Story of Obed 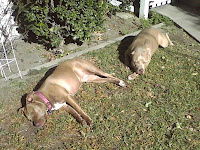 I love my job. It's never the same - even when I'm presenting the same material. You never know what's going to come out of a student's mouth. Last week, I had the honor of teaching Careers with Animals to a 5th grade class at Fenton Charter. The class was engaging, intelligent and fun. They kept me on their toes with questions ranging from "Do I need a permit to own a tiger?" to "What do you have to do to act in a movie with a dog?" to "Can you take someone's dog if they're being mean to it?" (paraphrasing).

That last question was a heroic one without an easy answer. It came from a boy named Obed.

"What if there's a guy in your neighborhood and he's really mean to his dog? Like he hits it every day with a stick? Could you take it from him? Like sneak in at night when no one can see you? I heard that might be illegal."

First, I love the compassion of this child. It's not a common thing to see in boys. When I explained to him that he would have to sneak onto the man's property, which would be trespassing (hence the "illegal" part), he came up with this:

"But what if you're just walking by and the gate happens to be open and he comes out to say hi to you and then follows you home? Could you keep him then?"

He's not just compassionate. This is child is creative. He's a hero in the making. His creativity made me laugh. It also reminded me of a story from a man at a Humane Education Conference I attended a few years ago.

I was staying with my mother for the weekend and got to witness a sad sight. Her neighbor's five year old son taking his shoe off and throwing it at their 10 week old puppy. Before I could reach the puppy, the father yelled, "Do it again!" What had the puppy done? It had bolted off the chain it was tied to in the front yard. I stepped in to help the poor thing, but the father grabbed the puppy and ran. Ironic that I was attending a conference on Humane Education...and it happened to be at the ASPCA. I reported him first thing in the morning and an Animal Control Officer was sent out immediately.

After sharing my story with the table I was seated at, one of the men told us that he had a neighbor who kept his American Pit Bull Terrier puppy tied up in the yard. This pup was never let off the chain. It never got to come inside the house - rain or shine. Rarely did the poor thing have food or water. It didn't have shelter. He lived in an area where it snowed during the winter. As if the living conditions weren't sad enough, the young man who owned the dog beat and kicked it frequently. They didn't have Animal Control in their area. He had tried repeatedly to speak with the young man and his girlfriend, to educate them, but they weren't open to it.

One night the puppy disappeared.

"I don't know what happened to it," he said, winking at me. "But I'm pretty sure it got a really good home."

I wonder if this will be Obed in thirty years. After he wins his Oscar and is commanding $20 million a film acting with dogs.
Posted by Jennie Bailey at 12:01 AM