A Conclusion to the Bob Saga 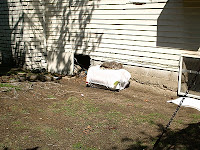 For those of you that don't know the Bob Saga, it starts here and continues here.

Bob was not going to go into a trap. I figured that out within two days of having one. Since he was so terribly skinny, I couldn't afford to continue starving him in hopes that he would go in. Instead, I pulled out a crate. I started feeding him right at the mouth of the crate. The next meal, I moved it just a bit farther back. Each day, I would move the meals until he had to go all the way into the crate to eat. This took me four days. On the third day, he was eating all the way inside, but would not go in with me next to it. Yesterday, he starting going in with me right there. This took incredible patience. It meant I had to be present for every meal - at the beginning and through it.

Last week, Bob started letting me pet him. After a day of petting, he started seeking me out. He would wander into our yard when he knew Lily was in the house and wait for me. When I would come out, he would run to me. Such a sweet, sweet boy. I was as smitten as he was becoming.

Unlike my ferals, Bob would come out during the day. In two weeks time, he warmed up to me and sought me out. This told me he used to be someone's pet. By the condition of him, I felt that he had been outside for some time. He was a "hot mess." His fur was matted, he was missing teeth and his mouth was full of puss. After a particularly bad day yesterday, I decided I had to just grab him. I taught this morning, came home this afternoon to him waiting for me (see picture above where he was asleep on the carrier). I put food in, he went all the way in and I shut the door.

Off to the vet we went. My husband met us there because he was curious as to what the outcome would be. We were worried. Would he had kidney failure? Would the vet recommended euthanisia because he was so ill? We crossed our fingers and hoped for the best. The vet tech scanned him for a microchip just in case.

They told us not to get our hopes up because they had seen this happen over and over lately - families moving and leaving their pets behind on the streets. My husband told them to stress that we wanted to keep Bob so that the family would be honest. If they didn't want him, he had a home with us. We didn't want them to lie and have him end up back on the street without the vet care he desperately needed.

Bob's real name is Lily (what are the chances?). He was a she. She was being missed terribly by a grieving owner who was leaving food out and setting traps every night in hopes of recovering her after a handyman let her out.

They lived across the street from us and down three houses.

Many people believe that cats can always find their way home. They can't. Even when they are that close to home. Microchips save lives. They reunite pets with their owners. Lily has a very happy ending. All it took was some compassion, patience and responsible owners who had their beloved pet microchipped.