Aftermath of 4th of July 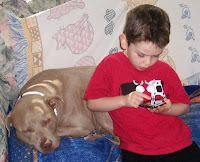 Our AmStaff, Lily, is a big baby. She managed to make it through her first three 4th of July fireworks with little more than a moderate concern. Unfortunately, this year we were walking her after dark on the 3rd of July and some teenage boy thought it would be funny to set off a firecracker right next to her (not funny even to him when I got done with my verbal lashing in front of all of his friends). The damage had already been done. Lily tried to run the three blocks home.

This turned the 4th of July into torture for her. Despite having the television on, which has worked in the past, she spent the twenty minutes panting heavily on her dog bed. We ignored her and went about our evening. It took her almost two hours until she fell into an exhausted sleep. She elected to sleep in the bedroom with us rather than in the living room with the cats for the first time in three months.

She's been retiring to the bedroom as soon as the sun goes down. We're not forcing her out. We coax her out for her evening potty before we go to bed. She gets a cookie and it's party time when she joins us.

She forgot her fear two nights ago when a friend came over. Unfortunately, the moment she went dashing into the yard was the exact moment the fireworks show started to celebrate the 100th anniversary of the city we live in. Lily dashed back into the house, into the bedroom and no amount of coaxing could get her back out again.

Tonight, we started Operation Safe Streets. I boiled some chicken, her favorite treat. I alerted some neighbors and friends when we were ready to leave. We didn't force her but she forgot her fear momentarily while performing tricks for chicken, when she saw a neighbor along the route, when she saw a doggy friend across the street. Our walk was not our usual hour. She did not stop at the Cookie House for a cookie. But she walked and sometimes she was happy for it. This is our new course of action each evening as the sun goes down. Her breed doesn't allow for early walks during the heat so she must get over this fear. And she will. Not by being forced or bullied, but by being rewarded. She'll remember the night is not scary.

Thank you to all the friends and neighbors who helped us out tonight along our route (and will be helping all this week)!